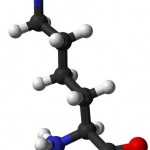 s an essential amino acid, lysine is needed for a variety of purposes. In children one of the most important benefits of lysine is promoting bone development and growth in children. In both children and adults, lysine helps the bodyabsorb calcium. These are just a few of the tasks that lysine is needed for, without lysine your body wouldnâ€™t be able to function as it is supposed to function.

Your body also needs lysine to help regulate the nitrogen in your bloodstream, lysine ensures that the correct level of nitrogen is in your body, too much can cause serious problems. Without the benefits of lysine, your body would not be able to produce antibodies, which means you would not be able to fight off any infections that come our way. Lysine also helps your body produce hormones and enzymes, which are important to how your body functions.

Another great benefit of lysine is in the repairing of tissue and the building of muscle protein. The reason that it is useful for building muscle protein is that it can help people recover from a variety of injuries. Another benefit of Lysine is it can even help people recover from surgeries by helping promote the haling of the muscles that were damaged during the injury or the surgery.

Something interesting to note about lysine is that it is very rare to find people who are suffering from a lysine deficiency. The reason that it is so rare to find this type of vitamin deficiency is because of how many foods contain lysine. You will find lysine in most protein foods, which means your chances of absorbing enough lysine by diet alone, is really good.

Although it is rare to find people, suffering from a lysine deficiency that doesnâ€™t mean it is impossible. Some people, mainly people who are on a vegetarian or vegan diet end up suffering from a lysine deficiency. The reason for this is that they do not eat as many protein foods as people who are not on this type of diet, vegetarians and vegans only have one source of protein, which are grains. Having only one source of protein makes getting the correct amount of lysine harder.

12 mg per every 2 pounds of body weight. For example, a 155-pound person would need about 840 mg of lysine a day in order not to be deficient.

As far as science can tell taking more than the recommended dose is not going to harm you as no serious side effects have ever been noted.